When the War Department issued General Order No. 84 on July 22, 1862, in part, creating the Army IX Corps under General Burnside, most of the corps’ soldiers would have hardly noticed. The regiments of this new corps had been together for many months serving in North Carolina under Burnside. This organization was simply a formality as part of a larger Army reorganization.

After the new corps left Newport News for Fredericksburg in early August 1862, two of its divisions were sent to assist John Pope’s embattled army near Manassas Junction. These two divisions were placed under the command of General Jesse Lee Reno who would later become the permanent commander. The third division (including the 8th Connecticut) remained at Fredericksburg under the control of General Burnside. In early September 1862, the IX Corps reunited under Reno’s leadership as Burnside assumed command of the right wing of the Army of Potomac (I and IX Corps) for the Maryland Campaign.

The use of corps badges and flags came into vague with commanders during the Civil War. However, the practice wasn’t formalized until Joseph Hooker became the commanding general of the Army of the Potomac in 1863. During my visit to Chatham Manor, I found this IX Corps flag on display in the Washington room of the manor: 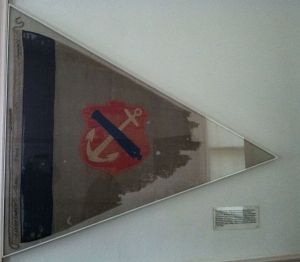 From my best research, this would appear to be the flag for the 2nd Brigade, 1st Division, IX Corps. According to the plate at the bottom, it became the lifelong possession of Major Robert A. Hutchins after the war. Major Hutchins was formerly the Assistant Adjutant-General of the First Division of IX Corps.

While these flags were not in use during Oliver Case’s days with the IX Corps, the anchor on the flag stems from the amphibious service of Burnside’s Expeditionary Corps in North Carolina during the early days of 1862.

On a cold, clear Saturday morning in November, I had the wonderful privilege to visit Chatham Manor, a lesser known component of the Fredericksburg and Spotsylvania National Military Park  which includes Fredericksburg, Chancellorsville, Wilderness, and Spotsylvania battlefields. The volunteer and ranger staff members were wonderful and I gratefully acknowledge their assistance in researching Oliver Case and the 8th Connecticut’s stay at the manor in August 1862. The buildings on the grounds of the manor serve as the park headquarters with five of the rooms in the main house open to public and containing some excellent exhibits. I highly recommend a visit.

Chatham Manor was originally constructed by one of Virginia’s most prominent citizens William Fitzhugh between the years 1768 and 1771. It is a beautiful Georgian-style house situated to overlook the Rappahannock River and the town of Fredericksburg. Fitzhugh owned thousands of acres in the area and Chatham Manor included over 1,200 acres with various structures on the grounds near the main house including barns, stables and a dairy operation.

Fitzhugh owned about 90 to 100 slaves who worked the plantation’s fields and other operations such as carpentry and blacksmith shops. In January of 1805, Chatham Manor was the site of a slave rebellion caused by a disagreement between some of the slaves and an overseer. After the slaves attacked the overseer, an armed posse was brought in to end the rebellion with one of those involved being executed and several others deported to a slave colony.

I discovered several interesting aspects of the Fitzhugh family and manor during my visit. First, Chatham had many famous visitors during the early years and also during the civil war (more on that later). William Fitzhugh had a close relationship with George Washington and his family because the Washington family farm was just down the river from Chatham. Washington and Fitzhugh also served together in the Virginia House of Burgesses before the American Revolution. It is documented in Washington’s surviving diaries of his numerous visits to the manor and one of the rooms the NPS now has open to the public served as his bedroom during those visits. 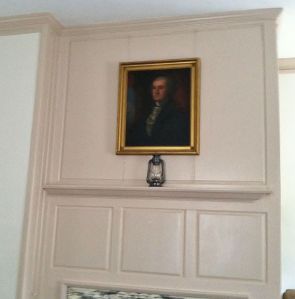 There were many other famous visitors to the Chatham Manor including Thomas Jefferson, James Monroe and William Henry Harrison as he traveled to his inauguration in Washington in March of 1841. The one visitor that concerns us most would not arrive on the grounds of Chatham until August 1862. More on him and the Civil War history of Chatham Manor in a later post. 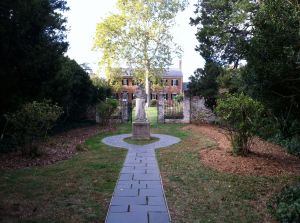 On the morning of August 5, 1862, Private Oliver Cromwell Case and his fellow soldiers of the 8th Connecticut arrived at Aquia (pronounced Ah-KWE-ya) Creek Landing, Virginia aboard the steamer “Columbia.” Oliver and his companions would find a quite busy logistical operation at this important Union transportation center on the Aquia Creek.

Aquia Creek Landing is located at the confluence of the Aquia Creek and the Potomac River in Virginia. The first Englishman to explore Aquia Creek and the area near the landing was Jamestown Colony leader, John Smith around 1610. The native Powhatans named the creek Quiyough which would later be changed to Acquia with the “c” being dropped around the time of the Civil War. Early settlers initially attempted to use the area for mining operations, but this endeavor never provide the expected profitability.

Beginning in 1815, a steamship company began providing service from the city of Washington to landing as a much faster alternative to the road to Fredericksburg which had developed into a transportation hub for points south. A railroad from Fredericksburg to Richmond was completed in 1837 which made the landing on Aquia Creek even more attractive. The year 1842 saw a critical development in the story of Aquia Creek Landing as the Richmond, Fredericksburg and Potomac Railroad extended their rail line from Fredericksburg to the landing. This now allowed cargo and passengers to move faster than ever from Washington to Richmond connecting to other areas in the north and south.

As the Civil War began, Confederate military leaders recognized the importance of this transportation link and moved forces quickly to secure it. The Confederate forces built fortifications and gun emplacements to protect the landing and on May 31/June 1, 1861 traded fire with the Union gunboats in the creek. The result of this action was inconclusive although the Confederates continued to hold the landing until early 1862 when the Union Army moved south in large numbers. The Confederates destroyed many of the docks and buildings and disabled the railroad as they evacuated the area.

As George McClellan began his drive toward Richmond from Fortress Monroe in 1862, Major General Irvin McDowell with the troops of his Department of the Rappahannock captured Fredericksburg. McDowell determined to establish Aquia Creek Landing as his headquarters in April 1862 because it provided clear lines of communication with Washington via water and rail. On April 20, 1862, McDowell and President Abraham Lincoln held meetings with other members of the cabinet aboard the cutter Miami anchored just off the landing. Union forces rebuilt the landing and placed the railroad to Fredericksburg back in service to support interior operations.

When the steamer “Columbia” docked at the landing on August 5, 1862, Oliver Case and the other soldiers of the 8th CVI where greeted by a busy logistical hub moving troops and supplies toward Fredericksburg. The troops of the 8th were quickly loaded onto railcars with Oliver gaining a prime seat on top of one of the cars.

Oliver and the 8th would return to landing less than one month later as the Union Army suffered a major defeat at Second Manassas and all Union troops were recalled to defend Washington. As the Union left Aquia Creek Landing in September of 1862, they destroyed it completely. The landing would be Oliver’s last view of Virginia, but General Burnside would return at the head of the Army of the Potomac in November of 1862. After the humiliating defeat at Fredericksburg in December and the infamous winter “mud march,” Union forces would again burn Aquia Creek Landing. Although the Union rebuilt it again in May 1864, the landing would never again see the level of activity it had experienced in August and September of 1862.

Today, the landing is a small, quiet park at the end of a two-lane road built atop the old railroad line. 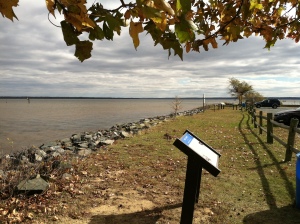 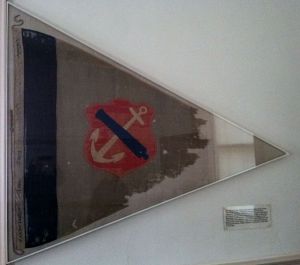 On August 7, 1862, Oliver Case penned his last known letter to his sister, Abbie…”Knowing you would be anxious to know of my whereabouts, I take the first opportunity of addressing a few lines to you.”

I don’t know if anyone who reads this blog was “anxious to know of my whereabouts” but I am now taking this first opportunity after an absence of a few weeks to address some new posts on Oliver to you. The photo above is a clue as to the subject for the next few posts.