As morning broke on the morning of September 19, 1862, Captain Wolcott P. Marsh, Commander of Company F, 8th Connecticut awoke to discover the rebels gone and that he was now assigned to lead the remains recovery detail for the regiment. Appropriately, Marsh, the former lieutenant and friend of Oliver Case, is the first member of the regiment to learn Oliver’s disposition:

We stacked arms and details were sent from different to pick up the dead so that could be buried together. I went up where our regit. was engaged and there what a sight. 30 men from our regit. alone lay dead in a little field and near by was 42 Zouaves (9th N. Y.) and many more from other regit. The first man I came to of my company was Charles E. Louis my acting orderly. Then Corp. Truck my color corporal and close by them lay Dwight Carry, Herbert Nee, Horace Rouse and Mr. Sweet all of my company then passing on to Co. A. were the body’s of Olive[r] Case, Orton Lord, Martin Wadhams and Lucius Wheeler then to Co. K. saw Jack Simons body the only one whose name remember…[1]

These soldiers of Company A are well known to Captain Marsh from his tenure as a lieutenant of the Company prior to being promoted and transferred to Company F. Captain Marsh’s detail goes about their work and the commander “had all body’s brought from hill down by several straw stacks.”[2]

This description taken with Marsh’s report of the unit positions on the day of the battle make it clear that the remains were removed from the “high water mark” area near the present-day monument. The area of the hay stacks is located to the north of the 40-acre cornfield in the area where the 8th CVI step off for the final assault on the day of the battle.

By afternoon, Oliver’s two brothers are allowed on the field to search for their younger brother. This will begin a chain of events which results in two burials and two graves for Oliver. Alonzo writes of seeking information about Oliver on the night after the battle and their journey onto the field two days later:

I went with my Brother to the Eighth Regiment to learn the fate of my younger Brother Oliver and found only eight or 10 of his company left from about 40 they had in the morning. Was told by a comrade that stood beside him that he fell and he called him by name but no reply. Said he was no doubt killed. The next morning we were marched down near the bridge and lay there all day. No one was allowed on the field as it was held by sharpshooters on both sides. The next day September 19 myself and brother had permission to go over the field and what for our brothers body being very sure he was dead we each took our canteens filled with water and commenced that awful sickening tramp and if I could picture to you the sad sites that we beheld. The ground for acres and miles in length were strewn with dead and wounded. The wounded crying for water they having lain there the whole day before and two nights — but everyone was looking for some comrade of their own Regiment but some time that afternoon we found the body of our brother we were looking after. He was no doubt killed instantly the bullet having passed through his head just about the top of his ears. We wrapped him in my blanket and carried him to the spot where the 16th dead were to be buried having first got permission from the Colonel of the Eighth and the 16th to do so. The 16th men were buried side by side in a trench and they dug a grave about 6 [feet] from them and we deposited the remains of my brother and that having first pinned a paper with his name and age on the inside of the blanket. Then they put up boards to teach with name and Regiment on them.[3]

The Grass Field behind the Otto Farmhouse, Site of Oliver’s First Burial

This was not the final resting place for Oliver. Alonzo continues:

His body lay there until December when father went there and brought the body to Simsbury where it now lies to mingle with the sole of his native town.[4] 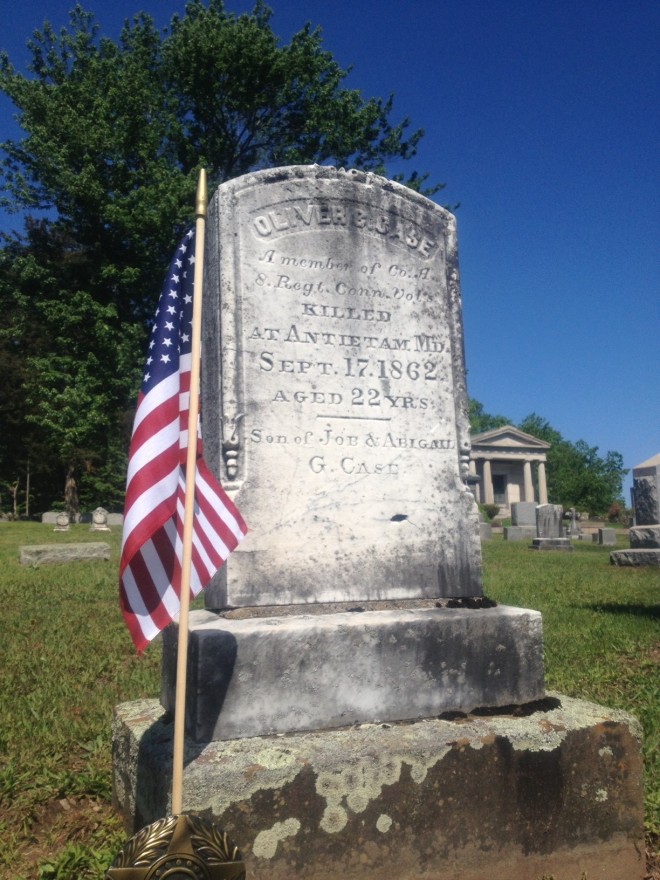 Oliver’s Final Resting Place, the Cemetery in His Hometown of Simsbury, Connecticut 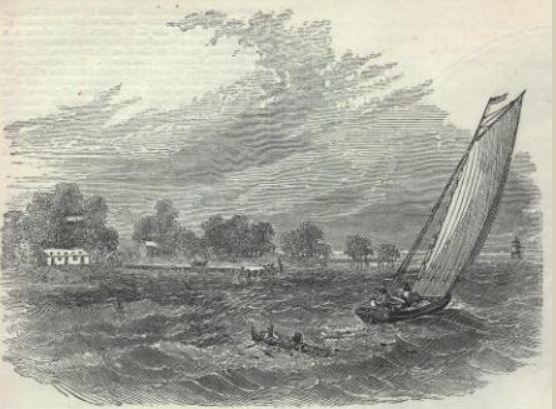 By the end of May 1862, Ambrose Burnside and his expeditionary force had spent five difficult, but rewarding months conducting operations against the Confederates on the North Carolina coast. Combat success at Roanoke Island, Newbern and Fort Macon had battle hardened Burnside’s troops who now turned their attention to occupation duty as the Union high command contemplated their next mission. Oliver Case and his comrades in the 8th Connecticut where given various missions in and around the city of Newbern. In late June 1862, after enjoying an extended stay in what Oliver called “one of the pleasantest cities I ever saw for its streets are shaded by large trees which meet overhead which makes the streets pleasant,” the expeditionary force commander received an urgent telegram from the Secretary of War.

We have intelligence that General McClellan has been attacked in large force and compelled to fall back toward the James River. We are not advised of his exact condition; but the President directs that you shall send him all the re-enforcements from your command to the James River that you can safely do without abandoning your own position. Let it be infantry entirely, as he said yesterday that he had cavalry enough.

Ambrose Burnside was now forced to change his focus from future offensive operations toward the inland of North Carolina and the monotony of occupation duty. His force had a new mission that would eventually bring them to northern Virginia to support the embattled forces of Union commander George B. McClellan. During the past four months, McClellan had deliberately marched his army from Fortress Monroe up the Virginia peninsula to the gates of the Confederate capital city. The Union army stalled outside of Richmond as its commander prepared for a long siege against an enemy force that he believed to be 2 to 3 times its actual size.

After the Confederate commander, Joseph Johnston was wounded by an artillery shell on June 1, 1862 during the fighting outside of Richmond, he was replaced by the more aggressive Robert E. Lee. Lee began to reinforce the defensive positions surrounding Richmond during a long lull in the fighting for most of the month of June. On June 25, 1862, Lee began a series of bold attacks that caught McClellan’s divided forces by surprise and began a series of events that would lead to a change of mission for the Burnside expedition. Known as the Seven Days Battles, this series of engagements caused McClellan to panic and he soon began the withdrawal of his army back down the peninsula toward Fort Monroe. The “large force” referred to in Secretary Stanton’s telegraph message to Burnside was a Confederate force of about 50,000 troops attacking a total Union force of over 100,000. McClellan’s proclivity for overestimating the enemy troop numbers and calling for reinforcements caused the Lincoln administration to recall Burnside from the coast of North Carolina.

The previous evening, McClellan had sent an urgent message to the Secretary of War creating the urgency to act on the part of the administration.

Have had a terrible contest. Attacked by greatly superior number in all directions on this side; we still hold our own, though a very heavy fire is still kept up on the left bank of Chickahominy. The odds have been immense. We hold our own very nearly. I may be forced to give up my position during the night, but will not if it is possible to avoid it. Had I 20,000 fresh and good troops we would be sure of a splendid victory to-morrow.
My men have fought magnificently.

Unknown to “Little Mac,” the President sent a personal message to General Burnside the following morning to warn him that his forces were needed in Virginia.

General BURNSIDE:
I think you had better go with any re-enforcements you can spare to General McClellan.
A. LINCOLN.

A few days earlier, McClellan had issued conflicting guidance to Burnside with the warning that “every minute is a great crisis” while simultaneously prescribing an overland route that could take up to two weeks for the troops of Burnside to cover. McClellan’s suggested route of march would take the three divisions initially to the northwest and then to the north crossing into Virginia approaching Petersburg from the south. It’s certainly possible that McClellan believed that Confederate intelligence reports of Burnside’s movement from the south could cause Lee to suspend offensive operations and focus on defending Richmond and Petersburg against this new threat.

Whatever McClellan’s logic, Burnside would not use the overland route. Within the week, the expeditionary force would begin loading ships for a trip to Virginia. On the 2nd of July, the 8th Connecticut and other regiments of Burnside’s Expeditionary Force were transported by rail to Morehead City, NC where they boarded the steamer “Admiral” and travel to Newport News, VA.

Croffut and Morris, historians of the Connecticut regiments described the movement and the soldiers’ new home at Newport News:

On July 2, the Eighth moved to Morehead City, and thence on the transport Admiral to Newport News, where a camp was set on an exposed sandy plain. The Eleventh followed closely. The beach of Hampton Roads, near at hand, protracted the delight of bathing. A few oysters were scattered along the clean bottom; and the boys felt out with their bare feet, dived down, and captured enough of the toothsome bivalves to break the monotony of salt pork and hard-tack.[1]

Another regimental historian of Burnside’s force offered a detailed view of Newport News:

At first view, Newport News had the appearance of a place where nothing new ever occurred or was likely to happen. A sandy plain, fifteen or twenty feet above the river, with a few old barracks, and some earthworks and ditches, constructed by General Butler’s troops; a gray sky, with spits of rain, made up the desolate picture. Beyond the plain was a swamp, with immense southern pitch-pines…[2]

View of Civil War Newport News from the James River

Oliver Case and all of Burnside’s Expedition would now have a new home from which to celebrate the 86th year of the Nation’s independence. For the next month, Burnside’s troops would sit at Newport News and wait for the call that would never come to assist the embattled Army of the Potomac.